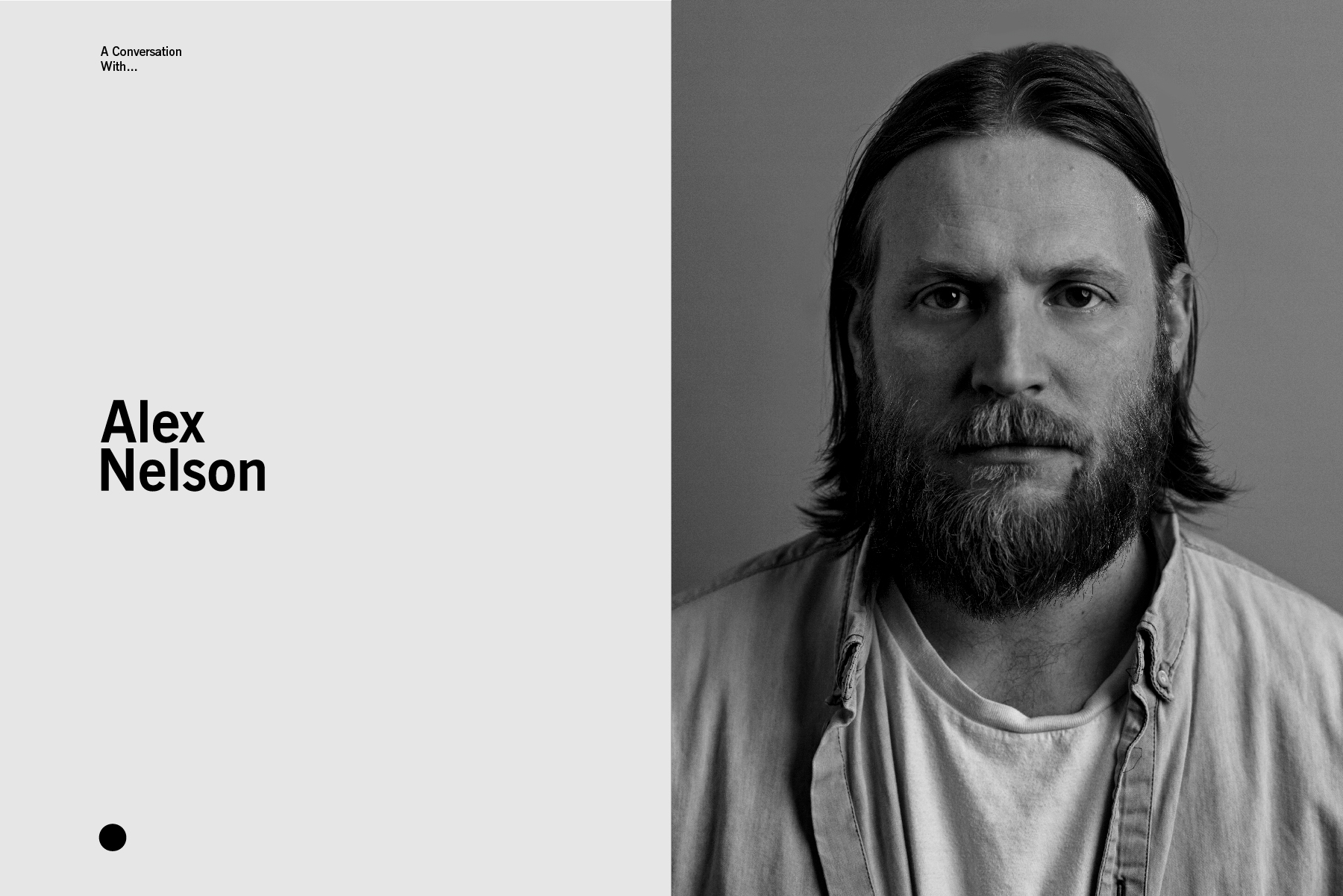 Co-founder and Creative Director of Post Projects, a graphic design and consulting studio based out of Vancouver B.C, Alex strives to create work that stands the test of time through meticulous processes and research. It all begins by gaining a thorough understanding of the clients needs and wants – a distinction that often gets missed. This then shapes the strategic direction that forms the foundation for designing a brand identity and ultimately communication system between a business and its customers. Alex, via Post Projects, is responsible for the graphic brand identities of some of the cities best restaurants, bars, and cafes. Revolver Cafe, Brassneck, and Magnet to name a few. We caught up with Alex to find out what makes him tick, and what else he’s been up to when he’s not in the studio.

Maks Eidelsen: Alex, Whats up dude?
Alex Nelson: Maks. Not much man. Just grinding away at the studio.

Is the studio back to running at full capacity? You guys keeping busy?
Yeah the agency is at full strength. The studio space itself has a few empty desks. I’d say our workload is manageable. “manageable” doesn’t look like an official word.

That’s awesome. haha no worries. What else you been up to asides from Post Projects to keep sane? Where can you be found having a beer or a bite to eat when you’re not grinding?
Well up until like a month ago it was mostly just hanging out at home like everyone else I guess. Now that things have opened up a bit I’m just enjoying getting to see some friends and doing some old fashioned socializing. As far as getting a beer goes I’ll patronize close to home mostly. Commercial drive has a few easy to sit at patios.

Gotta soak up those patios while we can. Any other interests or personal projects on the go taking up your time?
I dabble in some musical stuff with my pal Edo Van Breeman. He’s an amazing composer that lets me write some silly bass lines to his work on occasion. So far that’s been in an exclusively “jamming and beers” kind of context but it’s fun if nothing else. Other than that it’s mostly work around the house. We just moved so there’s still a bunch of set up to do.

Music, beyond just listening, seems to be a common interest in a lot of people doing creative work. Maybe there’s some parallels there? In a sense you’re setting a tone or creating a mood with sound, not that different from what can be done with imagery or design. Do you listen to different things depending on the type of project?
I’ve often drawn on a similar metaphor. Awareness and manipulation of positive and negative space is fundamentally important in both music and graphic design. I don’t gravitate towards anything too specific while working on a project. Being a bassist, I like my groove oriented stuff for sure. I’ll listen to whatever my Spotify Discover Weekly™ throws at me really. Also heavy into the podcasts.

Are you superstitious at all? Any normal or abnormal habits while starting out on a project?
Superstitious? Nah not at all. The stars are meaningless. (A Capricorn like myself would say that though, right?). Of course I do have some “normal” habits. Start broad, do some research, follow some instincts, see if there’s a through line in any of that. I usually start with type. Type just carries so much tonality with it, in a formal and conceptual sense, that I find it’s the thing I have to get right first.

Agreed. It’s interesting how the smallest difference in type can make a world of difference on how it’s perceived. After you get the type right, how closely do you stick to grids and other general house rules for design?
I’d say it depends. I dig a grid. Grids play different roles. If you’re making a poster, a grid can get you a specific formal effect by enforcing vertical or horizontal parities. While making a magazine, grids are a useful organizational tool. It’s hard to make a 150+ page publication without a grid. You can do it, but that’s a pretty bold decision. You’re making a statement doing that. And then when designing for web, having a grid is pretty much a technical requirement at this point. Even if you didn’t design a site with a grid in mind, your front-end developer will probably just use one anyways. So yeah it all just depends on what you’re making and what kind of tone you’re going for.

Totally. It’s funny, I find it’s also sometimes based on peoples personality. As in some rules are meant to be broken to find out what else is possible – whether it’s out of rebellion or more simply a sense of curiosity and adventure.  Or other times seeing inspiration in something totally unrelated and finding a way to bring that in which requires to work outside the lines.
For sure. Graphic design is a space where different personalities can do their thing. If you like rigorous detail, rule sets and structure, we have a job for you my friend. If you like to get wild, break the rules and just DGAF, oh you bet we have a job for you too (this person is probably an illustrator).

Lines begin to blur between an artist and a technician. At a time and place that’s over saturated with well just about everything, but specifically imagery and to an extent graphic design, how do you manage to continuously stay ahead of the curve and stand out?
A daunting task. One that I’m not sure I even do all that well. There’s a relativity to it right? Like who’s doing the looking and what have they seen before? I dunno man. There’s an endless stream of compelling and fresh visual culture literally in the palm of everyone’s hand. There’s no being ahead of that! I’m just trying to be at the party.

Well you seem to come well prepared for good time, every time. What are some source materials that get you stoked and inspired to push the needle with design?
Cheers. Ok last party metaphor. Graphic designers are visual DJs in a way. I’m mostly just using other peoples finely crafted work, cramming it all together and calling it mine. So in that sense I’m inspired by type designers a lot. The world of graphic design runs on the work of good type designers. I’ll find inspiration in pretty much any other visual art. Photography, illustration, fashion, fine arts, etc.

How hard are you on yourself with projects before letting something out in the world?  Does it need to meet a personal level of satisfaction even if you know the client will be stoked on it? Or, if they’re happy, you’re happy kind of deal?
Yeah so there’s two streams of critical analysis. First is the work has to satisfy whatever goals you and the client agreed upon when setting out to do the project (this can be different to the client liking the work on a personal level – try to avoid that as a standard for success). The second is the work should be great in the wider context of design. While that may seem like a personal thing (it is), it’s really more about the fact that doing great work is the only marketing a graphic design studio can do. If you’re not making great work, no one is going to want to work with you. So it’s self preservation as much as it is having personal standards.

That’s a great way of putting it. Do you ever say no to clients? Is there a formal or informal set of criteria to working with Post Projects?
No formal criteria. We like to think we’re down to work with whoever. As long as we get along and you have the resources to do the thing you want to do. Having said that, there are so many ways to make a viable project for any range of budgets. It doesn’t have to be a “cool” project either. As a designer, it’s on you to make it interesting.

That’s awesome. Do you guys have a design signature, or something you feel or would like the studio to be recognized for?
Some people say they can see a house style if you wanna call it that. I’m not sure we really have one. Type-focused? I’m not sure. I just want to make good work. I don’t think it has to be obvious who made it.

Thoughts on pinterest?
I don’t find I use it that much personally. But it’s certainly a massive repository of images. Use it if you find it useful. Just try to avoid getting caught in an echo chamber.

Any advice to someone who dreams of starting their own agency one day?s
Sort out the administrative stuff early if you can. Save that tax money. Get confident around talking about money. Strive for utmost clarity when it comes to your process. Know what you’re selling and make doubly sure your client knows what they’re buying. Are you selling time? Outputs? Outcomes? They’re all different. Hmu if you want a reading list.

Beer while you work?
After.

True, taste better when you’ve earned it. Thanks for your time Alex.
My pleasure, Maks