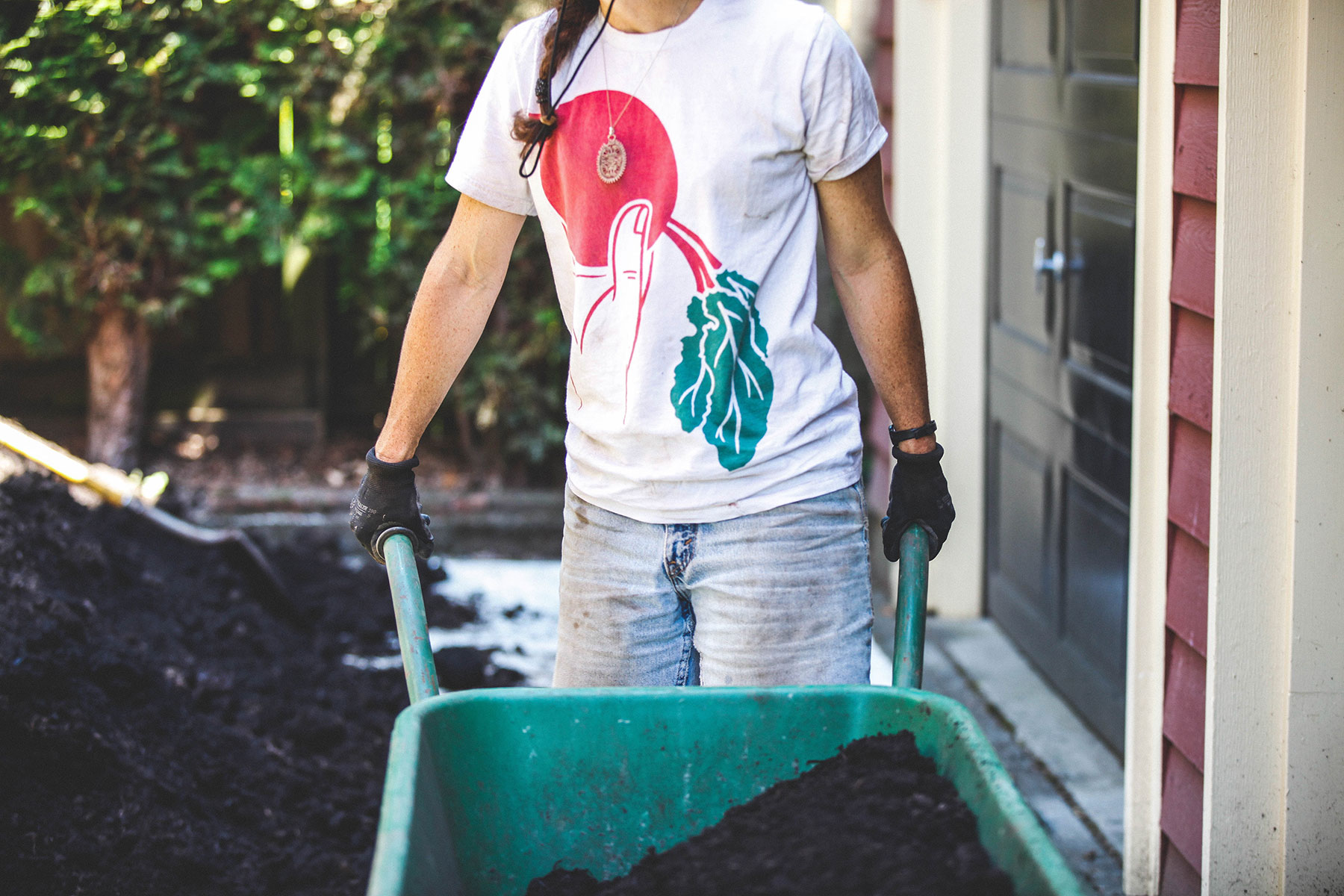 Just off Main Street in East Vancouver there is a garden planted a little bit differently than most in the city, tangled up in an organized chaos that only well-kept plots pull off gracefully. Framed within four-by-six-foot beds, abundant garlic grows beside deep green leaves of arugula, kale, and watercress; beets and carrots germinate in soil shared by cucumbers, jalapeños, and bright constellations of baby tomatoes. The heat of summer encourages strawberries and raspberries to ripen nearby, while the autumn months will see pumpkins push out of the earth alongside knotted heads of cauliflower. In another section there is an expansive lavender patch—“for my bees,” says Lisa Giroday, who owns the home garden with her family. “Oh, I also have an ornamental garden,” adds the bespectacled Giroday, not missing a beat. “And I use that term quite loosely, because they are all pollinator-friendly or medicinal plants.” Then she’s off again, remembering another far-off corner of her verdant green space that burgeons with organic bounty all year long.

Giroday is co-owner of Vancouver’s beloved urban gardening co-operative Victory Gardens, alongside Sam Philips and Maxim Winther; they also have three employees and a smattering of dedicated volunteers. Since 2012, the business has grown as sturdily as the gardens it helps foster. Now, in the thick of its fifth growing season, Victory Gardens has managed to stay true to its vision, and slogan: “We help you grow food!”

Named for the historic plots of the same moniker, Victory Gardens is emblematic of old becoming new again. “In the earlier days of the company,” says Giroday, “we were primarily servicing the converted; you know, the folks that were already living a healthy lifestyle that was in keeping with low-impact sustainable consumption.” Now, she explains, the movement toward consuming good food is becoming a part of our collective discourse. “We aren’t typically explaining why it is important to consume organically,” she says. “We’re showing [our clients] how to use their own urban space a little bit differently.”

Residential customers still make up the majority of Victory Gardens’ business—mostly in Vancouver, and also in North Vancouver, Richmond, and Burnaby—but its community stretches far beyond the reaches of private gardens. This year, the company launched a Classroom Gardener program in a Burnaby elementary school that teaches kids how to grow their own produce, and, in turn, empowers them to get excited about food. “They love it—kids love getting dirty, and they’re really intuitive in the garden,” says Giroday. “The kids were fighting over who got to eat the pak choi the other day.”

The seeds of Victory Gardens’ network have scattered far due to a common love. “What’s cool is, because we are not technically urban farmers—as in, we don’t produce and then sell food—but we do share a lot of their values and aspirations, we have been able to build our community with them,” Giroday says. Local love is naturally omnipresent in the Victory Gardens game plan, and past collaborations have included cedar garden boxes with Union Wood Company and overalls with local designer Glasnost. Like a fast-growing crop, the Victory Gardens system spills over borders, too, and even Portland-based magazine Kinfolk has brought them on board as a city sponsor to host Vancouver events.

This year, Giroday also saw the addition of a new program for restaurants called Sky High Farm Subscription. For this, the company has been generously loaned a Vancouver rooftop planting area that is large enough for its needs. While it’s difficult to look at our quickly densifying city of glass and imagine much extra space to grow food, Giroday has a different perspective. “[The rooftops] get so much light, so much rain… and they are totally marginalized,” she says. “We never see them, never touch them.”

And so, the Victory Gardens team will continue forging growth in spaces of every shape and size across the city, building a community around local food production. After all, as Giroday asserts, “there is no space too small to grow in.” 3ND